Our first venture at making links with productive walled gardens in Europe was a great success, with over 100 delegates, and an excellent range of speakers from Belgium, France, Germany, and the UK. 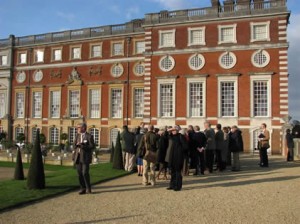 Outside the Palace A group of delegates in the Privy Garden

Two of the speakers were Herman van den Bossch who spoke on‘The Museum Garden at Castle Gaasbeek: the making and keeping of a living laboratory’  and Dr. Kristin Püttmann, who spoke on ‘A Little Bit of Britain – two late 18th century walled kitchen gardens in Northern Germany’