A visit to Chris and Karen Cronin at Croome walled garden last month found them exploring a new archeological discovery in an old greenhouse.

After carefully examining an old illustration of an unusual vinery they realized that it may very well be the ruined greenhouse attached to the hotwall at the Southern end of the garden.

Chris also saw that he could prove this by excavating the floor in one corner and, if correct, he would find steps leading down to a furnace.

So, armed with pick and shovel he set about the job . . .2000 calories later his efforts were met with success! 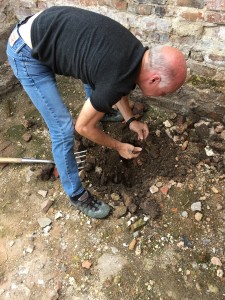 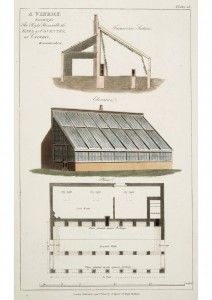 The greenhouse has vines planted along both the front and back walls with arches under both walls to allow the roots to move outside.The hot smoke from the furnace is circulated along the back wall and through the centre of the greenhouse via brick ducting before escaping via the central rear chimney.

Good luck with the restoration Chris and Karen!

Chris and Karen: we had a most wonderful day at Croome, thanks to you, Mike and Katherine and our views of the Vine House were fascinating! i will be in touch soon about my lecture! We have good photographs but there are a few blanks!I hope everyone loved the roses the following weekend! The scent was superb…

Oh – and we have fished out the photo of the hot wall at Strathmore in Tasmania so it will be on its way to you soon!