The Gardens are experiencing ‘invasions’. Several school parties excitedly descend on the Gardens, enjoying their end-of-term treat and discovering the Roald Dahl exhibits staged round the garden.   Blackbirds were observed picking off not-quite-ripe cherries from the fan-trained trees on the north-facing wall. A Polytunnel in the Old Nursery and Jerusalem artichokes were flattened by a day of strong wind.

The most unwelcome ‘invader’ of all is the annual appearance of the pear-rust fungus, which becomes obvious as orange spots on the leaves of the pear trees. This fungus overwinters on conifers, but as these are unlikely to be removed, we have to be vigilant for signs of the orange spot. Two of us spent an entire day picking off the affected leaves from the espaliered pears and the free-standing pears in the Orchard Lawn. We had to keep stopping (not that we mind) to explain to interested visitors what we were doing, and its beneficial outcome.

The Showground is a hive of activity, getting ready for the RHS Tatton Park Flower Show (the friendliest). Frenzied activity inbetween the showers will all be worthwhile and the show will be over all too quickly. The Deer and the Sheep will be glad to have their ‘meadow’ back, but the bees which find a new source of flower nectar will wonder where they have disappeared to. 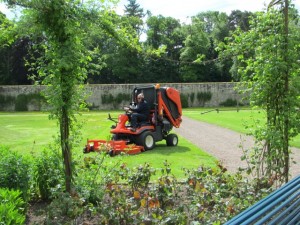 Tatton Park did well with their BFG Garden, with lots of publicity on the local television programmes. The giant gooseberry grower (take that which way you will) on the Gardens Team also had a good show display for the Cheshire Society.

The Showground has now been restored back to ‘meadow’ and the deer and sheep have moved back in to keep it in trim as four-legged ‘laaawnmowers’.

Oh the weeds! It seems that as we move onto the next patch of weeds, the first patch the next week springs weeds anew, and bigger than before. Harvesting of salad and vegetable crops continues apace. In the Orchard area the wild flower meadow where the soft fruit, raspberries, etc. were is in blooming magnificence; each week more flowers appear and the area is much loved by visitors, volunteers and gardeners alike, not to mention a variety of flying critters. Pruning of the pear espaliers continues, and it is surprising that as vigorous growth is pruned out, hidden pear rust-affected leaves become apparent, previously having escaped our vigilance.   Unruliness gives way to neatness; apple espaliers are almost complete, as are the cordons. The stone fruit fan-trained trees against the walls are in need of renovation now the plums and cherries have been picked. Woody growth has been very vigorous and has been missed in the previous year due to the busyness of keeping the gardens in good fettle. However, this is a job the gardeners will have to do, as volunteers are not allowed up ladders. There is still the matter of the 89 freestanding fruit trees in the Orchard Lawn needing pruning, so perhaps next month the Tuesday Team can be let loose on these. At the moment they are fully involved in weeding and harvesting on the Kitchen Garden. The Rhubarb Walk at the bottom of the garden is one place where there is shade, and so is a popular spot for weeders.

The Peach Case has now been fully renovated and is back to its former glory.

The late August Bank Holiday brought many visitors, all eyeing up the apples and pears, which won’t be ready until Apple Tasting Day in early October.