Day 1: Scorchio! Day 2: Delugio! With an amazing ‘electric lightning in the clouds’ show late evening. Pity the Show Garden builders digging in round the Tatton Clump, for the RHS Tatton Park Flower Show, held in the Park on a 25 acre site later this month. The weather seems to be hot one day and wet the next. It seems to suit the wild orchids by the roadside, and the convolvulus sprawling over the hedges. 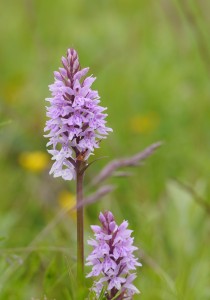 Pear-rust patrolling continues, the infected leaves are becoming harder to find. The espaliered pear trees have had their new growth pruned back to five leaves by two of us working a ‘buddy system’ either side of the espaliers, the aim being to let in air and light, and encourage the trees to concentrate on developing their fruit, rather than growing new wood. The apple espaliers will require the same treatment, with both apple and pear espalier new growth being further reduced down to two leaves later in the season, before harvest. Corvid-disturbed mulch from under the espalier trees was swept from the paths back to the beds round the Orchard. The Parkland is a hive of busyness with exhibitors finalising their displays for the Annual Flower Show. So much preparation, a few hectic days, and then it is all over and time to remove all signs of the show, followed by contractors to repair, renovate, reseed and return the Parkland back to as before – in pouring rain, of course.
Soft fruit continues to be harvested, as well as saladings, leafy veg, peas and beans for use in the restaurant, cottage café and for sale in the garden shop. Small wasps are busy harvesting pollen from a flowering fennel plant and bees are busy on the marjoram.
I had been concentrating so much on the many pear espaliers that the fact there are three rows of standard pear trees in the Orchard Lawn slipped my mind. Three of us patrolled these trees and soon picked off the pear rust-affected leaves before the rust made a break for freedom. Half the Team blitzed the weeds in the soft fruit area of the Orchard, the other half blitzed the weeds ‘providing a green mulch’ around the leeks and fennel. None of the team believed the theory ploy of ‘green mulch’ but agreed that the weeds were very prolific this year, the weather being ideal for their bid to take over our world of the Kitchen Garden and Orchard. 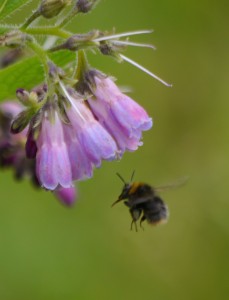 Wasps are mining into the pears, where birds have first pecked at the fruit; yellow black-spotted ladybirds are also joining in the feast. St Bartholomew’s Day (24 August) is said by country folk to herald the changing of the seasons, and the mornings are certainly cooler. The Flower Show area has been renovated and reclaimed by the deer and sheep. In the coming weeks two of us will be concentrating on pruning the espaliered apple trees. Being trained on a wire ‘fence’ the espaliers can be accessed from front and back, so two of us can work as a team on each tree, making sure we sterilise our secateurs between each tree, to prevent unwanted possible cross infection.
The last Bank Holiday approaches, and the Gardens and Parkland will be busy with visitors. This year a wild flower cutting mix has been sown either side of the Pergola Walk leading to Charlotte’s Garden, and is the first thing visitors see. It certainly seems to give much pleasure and definitely has the ‘wow’ factor.