The early May Bank Holiday was very wet, but it heralded the end of the ‘blackthorn winter’, so the following week was lovely and sunny which brought out the Stitchwort, Woodruff, Cow Parsley and Hawthorn along the lanes leading to Tatton, where the Orchard is a breathtaking sight of pear, apple, cherry and plum blossom, buzzing with a variety of bees and hoverflies. The Peach Case restoration is slowly progressing and the Swifts are back.

The Team planted potatoes and peas in the Kitchen Garden and weeded the Herbs. Two of us were in the Orchard weeding, taking advantage of the shade provided by the walls against which the plums and cherries are fan-trained. The Gardener’s Cottage Café garden received a bit of attention, and next will be to scrape the weeds from the side of the hoggin paths round the Orchard, and to weed the espalier beds as we go round. Blown winter cabbages were removed, the Asparagus bed was weeded and the early peas were ‘sticked’ with twigs from various trees like Birch and Alder. Four varieties of Leek seeds were planted in multi-cell modules.

The Wisterias over the Gardeners’ Bothy and the Lord’s Walk Pergola in the Orchard leading from the garden entrance to Charlotte’s Garden are in full bloom and the breeze is wafting their perfume along the paths. The cruciform apple arches in the middle of the Kitchen Garden needed weeding round the trees, and also the Chive border in full flower which had grasses hiding in it. The sides of the hoggin paths were hoed to remove weed seedlings. 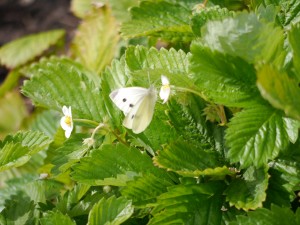 Fields of buttercups vying to be the yellowest against the ripening crop of oilseed (brassica rapa) were evident over the lane hedgerows bedecked with wild roses and elder flowers nodding over cow parsley and ox-eye daisies on our way to Tatton.

National Volunteers Week saw the annual presentation of long service awards to the gardening volunteers. Yours truly received the 15 year award gold pin and a letter of thanks from the ‘head honcho’. The ceremony was followed by a tour of the lesser known parts of the garden and future plans for opening up vistas were explained.

After several days of heavy downpours the weeds have sprung up so the Team set to weeding the espalier beds in the Orchard and clearing the edgings from the lawns in Charlotte’s Garden.   At the bottom of the Kitchen Garden, which is always slightly damp as the garden is laid out on a slight slope, the 39 varieties of Rhubarb were benefiting from a good weeding, especially as Himalayan Balsam was hiding there. The two Fig Houses were cleared of overwintered crops and tomatoes planted in the upper one; the lower one is to have aubergines and other compatible crops. The Kitchen Garden now has mounded rows of courgettes, the peas and broad beans are flowering, attracting different kinds of bees, and hopefully not blackfly.

As a result of recent heavy showers the weeds intent on global domination have yet again invaded the Kitchen Garden. Urgent action was needed to rescue the Asparagus and Sea Kale from the strangling weeds that seemed to grow before our eyes. The Rhubarb Walk at the bottom of the Kitchen Garden was being smothered by a sea of rose-bay willow herb a metre high and also the dreaded Himalayan balsam. I was bitten five times on my ‘pulling up weeds’ arm, presumably by a hidden horsefly.

Four ladies in our Team celebrated a significant birthday by putting on a buffet lunch for the Team which was greatly enjoyed by all, including two previous members of the Tuesday Team on a garden visit. Our lunch break was a little longer than usual. The cabbages under netting (to deter flying pests) were in need of a good weed; herbs were added to the herb bed outside Fig House No.1 and then the rains came.