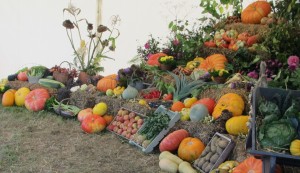 The pumpkins and squashes gathered for Halloween are still frighteningly good, especially the ghostly white ones, which are a talking point.

The Autumn colours have been magnificent this year, especially in the Formal Gardens and the Japanese Garden. The person(s) tasked with picking up every leaf from the moss in this garden are not envied. The lawns in Charlotte’s Garden have been scarified and several of the Tuesday Team valiantly raked up huge piles of moss and thatch ready to put on the trailer. In the Kitchen Garden two of us started to sweep underneath and alongside the Box hedging to remove the dead leaves which might be a source of Box blight. This job will take another afternoon to complete, and then there is the Box hedging all round the Orchard to tackle. A pair of Swans flew overhead, making their way to one of the meres in the Parkland.

The Kitchen Garden is full of activity, some taking down the runner bean plants which have been so prolific this year, and others steadily preparing the area for winter by removing spent crops, removing weeds and ploughing empty ground before top dressing with well-rotted manure. The Rhubarb Walk at the western end is undergoing a refresh, and the Horseradish (some of which is a rare variegated variety) has been moved to a fresh bed as it was getting in the way of the rhubarb. Plans for next year are being formulated: it is far from easy to be both a demonstration and productive Kitchen Garden but this year has definitely been its one of its best years, all due to a single gardener and the gardening volunteers.

Remedial work has started on repositioning the ‘Victorian’ tile edgings to the four growing quarters in the Kitchen Garden, which may take some time. The tiles edging the ‘slip beds’ around the perimeter of the Kitchen Garden are also being rediscovered from under piles of earth and overlapping hoggin, to make a neat edge once again.

The wild flower beds in the Orchard are now at an end, and so some of the Team set to work clearing the last two beds, easier than it sounds.

After the high winds, lots of leaves to sweep up: Wisteria leaves have dropped under the Pergola in the Orchard leading to Charlotte’s Garden, which has extensive lawns.

A different day, very overcast, more leaves removed from the Orchard, and along the L-Borders in Charlotte’s Garden. The herbaceous borders here also received a haircut and a rake-over.

As it was our last working day this year, the Tuesday Team worked through into the afternoon, and then had a Team Lunch, incorporating a birthday, to celebrate our hard work throughout the year.

The next Tuesday saw the majority of volunteers gather for a Christmas Buffet Lunch held in the Tenants Hall. It was good to see and meet up with members of the other volunteer teams, even though we had to pay for the privilege.

We are now all ‘laid off’ until mid January. The Tuesday Team intend to do their annual walk before then to Knutsford for coffee and then walk back to the Stable Yard for lunch on the second Tuesday, to gear ourselves up for starting back at work on the third Tuesday in January.

The Tuesday Team join me in wishing all members of WKGN a very enjoyable Christmas and a good growing year in 2017.

Thank you for your 2016 musings. Love them and they are always a delight. – look forward to 2017 editions
Best wishes for the New Year!