Dodging the occasional shower the Tuesday Team was let loose on the apple cordons and espaliers following a brief explanatory tutorial by the Gaffer. The transformation of the trees back to neatness was like a time-lapse film, and was greatly enjoyed by the Team as it was a standing-up job with opportunity for cheery banter, which made a great change from several weeks of being on their knees weeding in the Kitchen Garden. Visitors strolling round the Orchard were fascinated by the intense activity of the happy ‘pruners’ and asked lots of questions 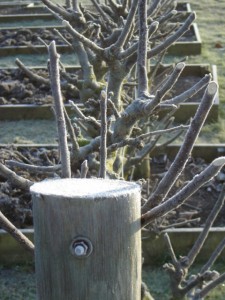 In the Kitchen Garden apple trees are trained over arches, making short tunnels over each of the four paths where they meet in the middle. The following week four of us spent the day pruning these apple trees back to the column arches; the top growth over the arches needs a ladder, so the gardeners will take this job in hand. The rest of the Team were weeding, picking, planting, sowing winter lettuce, etc.
The Orchard Lawn was covered in windfalls, attended by wasps, flies, ladybirds and butterflies. Two of us spent the day, with litter pickers (‘cos we’re too old to keep touching our toes ☺) picking up the fallen fruit, sorting into good, not too bad and rotten. Hopefully the not too bad ones will go to the pigs at the Home Farm; the good ones will be used by the volunteers in a variety of culinary ways. In the loft above the garden office is a small lonely apple press which hopefully could be used to make apple juice, and if the juice is allowed to mature with a bit of added sugar, cider.
Autumn mists and cooler mornings herald our annual Apple Tasting Day on the first Sunday in October. The varieties grown at Tatton are historic and not available in your local greengrocer. Lots of interest and enjoyable tasting by visitors.
More windfalls to be gathered; I spent the day pruning out this year’s fruited canes/vines from the six Marionberries (raspberry/blackberry/tayberry cross). The next job was to thin out the canes/vines and tie in the remaining to fruit next year. The ‘cavalry’ came in the form of other team members, who cleared up the pruned-out canes and the fallen leaves from the vines. Another job ticked off the list.
All too soon the magnificent pumpkins were gathered in from the Kitchen Garden and proudly displayed along the garden entrance corridor, together with Halloween decorations to delight the many children on a half-term holiday visit to the Gardens. The Halloween theme continued through the Gardens and shrieks of delight could be heard as yet another ‘ghost’ was added to the count. 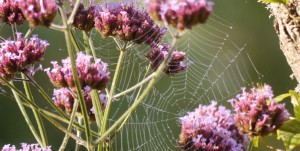 Early morning mist decorates spiders webs with jewelled beads, and the sheep and deer appear appropriately as ghostly figures.
The season marches on and soon it will be Bonfire Night, with woodsmoke curling over the Kitchen Garden from the wood beyond, where wood ash is steadily increasing in volume, soon to be spread round the productive fruit garden, to be washed in by winter rains.